Applications and Properties of Gold Nanoparticles

Gold nanoparticles are used for medical applications rather using elements such as platinum which can be lethal in certain circumstances. Forming gold into nanoparticles allows to use areas that are too small to reach which brings new potential and capabilities.

For Gold nanoparticle application, it has some clear advantages – when gold nanoparticles are very small with a diameter of 5 nm or less, they can used as catalyst; for instance transform air pollutants into harmless molecules. Gold nanoparticle can also be used to treat diseased regions of the body such as cancer tumors and other molecules such as therapeutic drug molecules. Another interesting property of gold nanoparticle; it has ability to convert certain wavelengths of light into heat [1]. 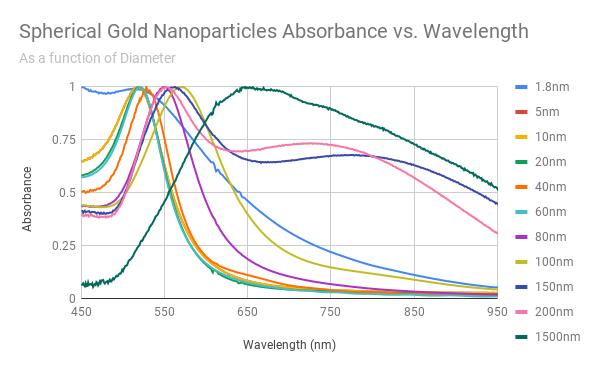 Gold is well known as a noble metal because it is relatively unreactive. Unlike base metals like copper and nickel, gold is resistant to corrosion and oxidation. At nanometer scale gold particles are chemically reactive and make exceptional catalysts. Gold nanostructures are found in various applications including drug delivery, bio imaging, bio sensors and toxic gas detection.

As per scientist, who made the discovery: they found new way of creating gold nanowires and nanoparticles using water droplets. From previous analysis, they knew that chemical reactions proceed faster in micro droplets than in larger solution volumes. Scientist observed that gold particle grew over 100, 000 times faster in micro droplets. Nevertheless, the most interesting examination was made when running a control analysis in which they replaced the reducing agent, which discharges the gold nanoparticles with micro droplets of water [3,4].

In this study, academics used visible and infrared light that allows gold nanoparticles to absorb it faster and then transfer few electrons generated as a result of the light concentration to neighboring materials like titanium dioxide. Scientist coated gold nanoparticles with titanium dioxide and uncovered the material to infrared, ultra violet and visible spectrum of light. They studied how electrons move gold to the material. The Scientist found that the electrons which trigger reactions created hydrogen from water over four times more efficiently than previously which was validated. Hydrogen can be used to store solar energy and then used for energy in the absence of sun[5,6].

University scientist discovered that liquid gold looks like on the nanoscale and mapped the way in which nanoparticles melt. Research team used gold in their analysis. They arrived their results by mirroring gold nanoparticles with diameters ranging from 2 to 5 nanometers using aberration and corrected using scanning transmission electron microscope. Their analysis were sustained by large scale quantum mechanical simulations [7,8].

Figure 2: Illustrates liquid crystals (texture at middle can be adopted for optical storage devices (ITO cell at right image). Gray color spot in the middle of ITO cell is the UV irradiated area which is disordered isotropic phase whereas greenish area is protected from the light by mask [9].

This research is also relevant to research on DNA based electronics which enables to use DNA as a pattern for creating nano electronic circuits [10,11].

In this research X-ray single crystal diffraction analysis of gold nanoclusters that are composed of a core; formed of dozens gold atoms which are covered and protected by a layer of molecules. It has intrinsic limitation that good quality single crystals are very hard to attain. Then research team developed an electrochemical technique that lets growing high purity crystals in big quantities and are very high crystallographic quality. By giving a very small current to flow between two electrodes, dense forest of millimeter long crystals can be created directly onto the electrode surface [13,14].

There are no conflict of interest as per Author’s point of view.

Copyright: Mitra M 2019. This is an open-access article distributed under the terms of the Creative Commons Attribution License, which permits unrestricted use, distribution, and reproduction in any medium, provided the original author and source are credited.

Synthesis and Characterization of a Silver Nanoparticle- Based Material

Bacteriobot Drug-Liposome Carriers: An Optimization of Cancer-Drug Delivery to the Colon by Manipulating the Gut Microbiome

Open Access by Magnus Med Club Ltd is licensed under a Creative Commons Attribution 4.0 International License. Based On a Work at magnusmedclub.com